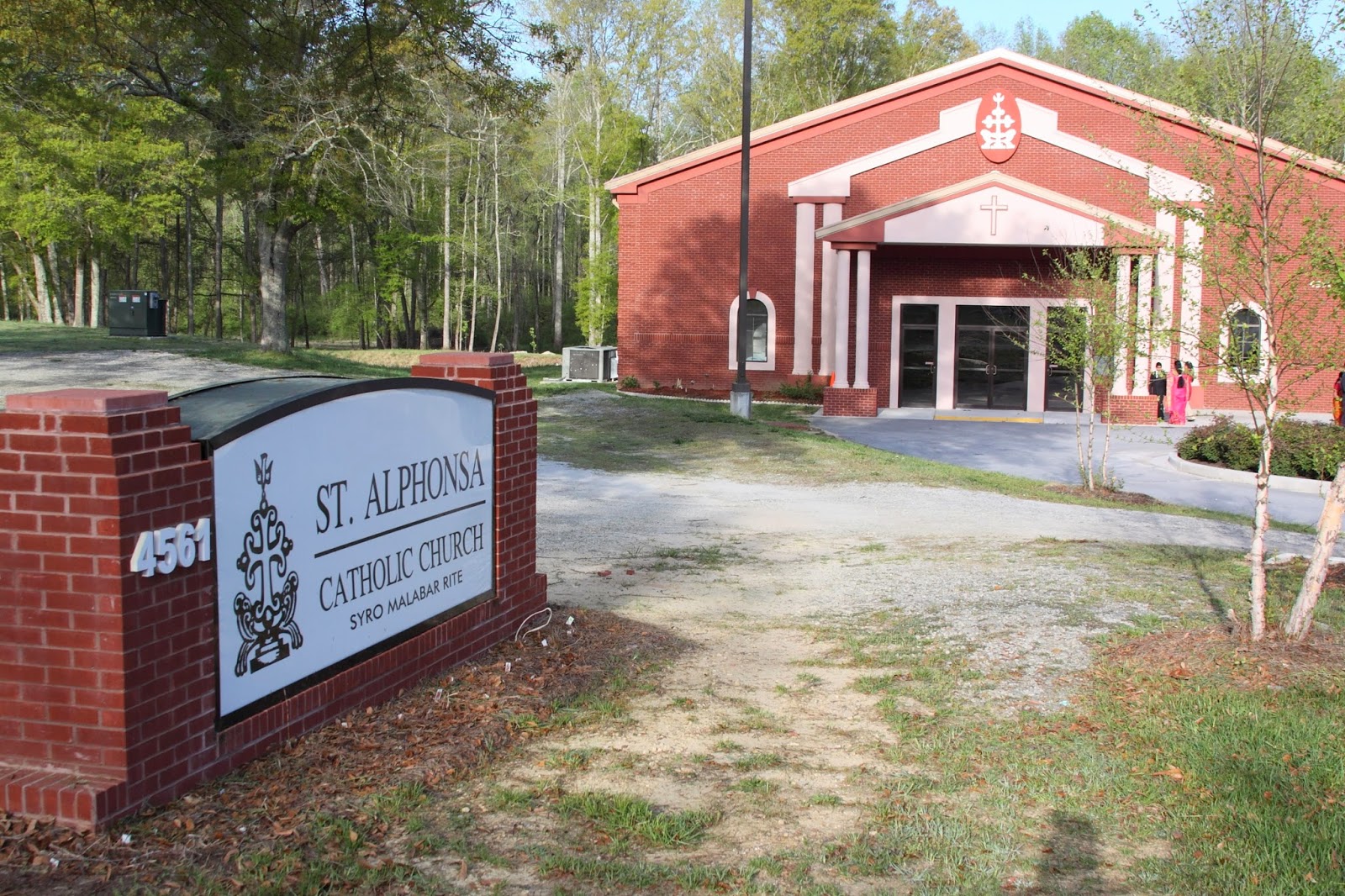 Posted by Chacko Kalarickal at 11:15 AM 7 comments:

Dear Friend
You may have heard about the "Syro-Malabar issue" that has suddenly become a hot topic in Delhi. You may be wondering what the agitation is all about and, more importantly, whether or how it will affect Indian Catholics in Delhi and everywhere else, whether or not they are of Syro-Malabar ancestry.
Please be sure that this matter is not a small, localised or limited matter pertaining to one section of Catholics. This matter threatens to blow up into a full-fledged division of the Catholic Church in India. It also has the potential to expose our beloved Church to scandal and scorn. And be sure, it WILL, sooner rather than later, affect YOU, whichever part of India you come from.
Some of us feel so strongly about this matter that we sent a formal Petition to the Holy Father on 24 May 2014, feast of Mary Help of Christians. The Petition, which we worked on for several months, is 155 pages long, of which 109 are documents dating back to 1974 (40 years) exposing the machinations of the Syro-Malabar Church of Kerala. A PDF version of the Petition is attached herewith.
For the love of our Catholic Church, we are attaching the first issue of "Laity4Unity",  a one-sheet leaflet (two sides), which will explain very briefly and simply what the issue is all about. We call upon you, whether of Syro-Malabar ancestry or otherwise, to join us in halting in their tracks these attacks on the unity of the Universal Church by a few people.
Your feedback on the leaflet would be welcome.
Yours in Our Lord
The Coordinating Group
Syro Malabar Catholics
Delhi Catholic Archdiocese
Email: riteissuencr@gmail.com
Facebook: Rite Issue 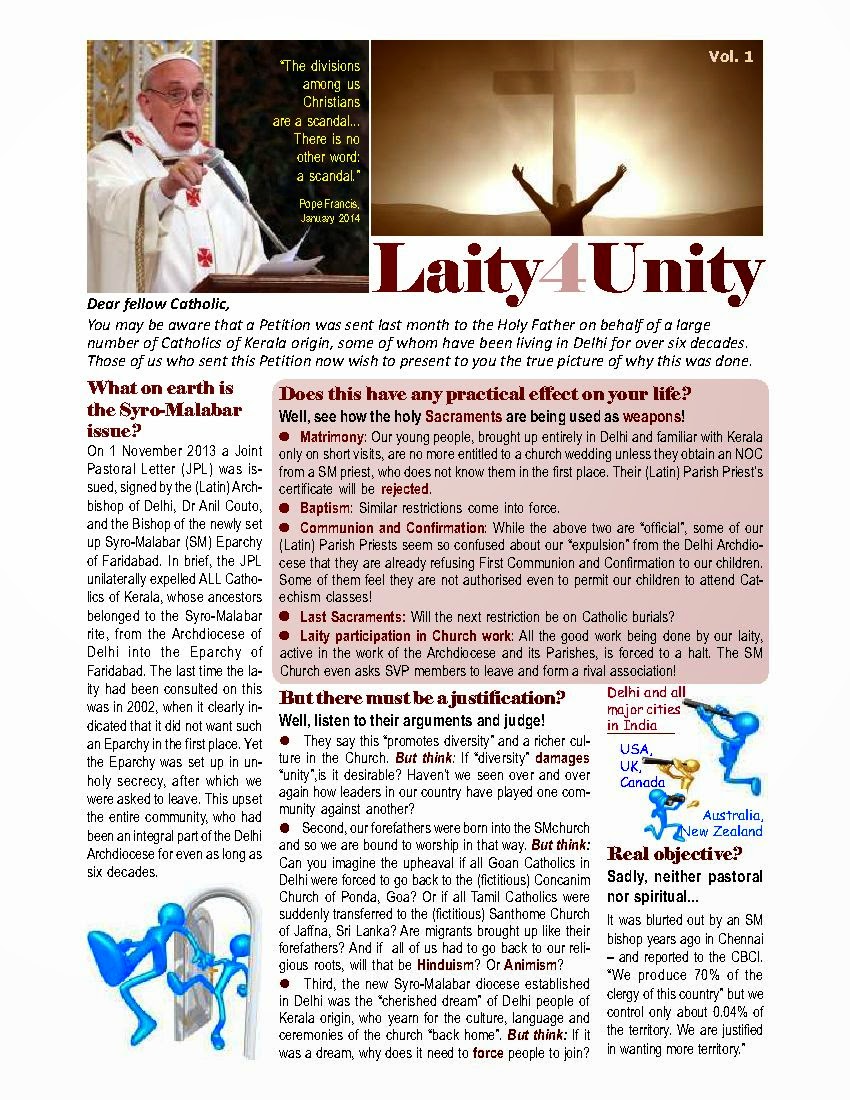 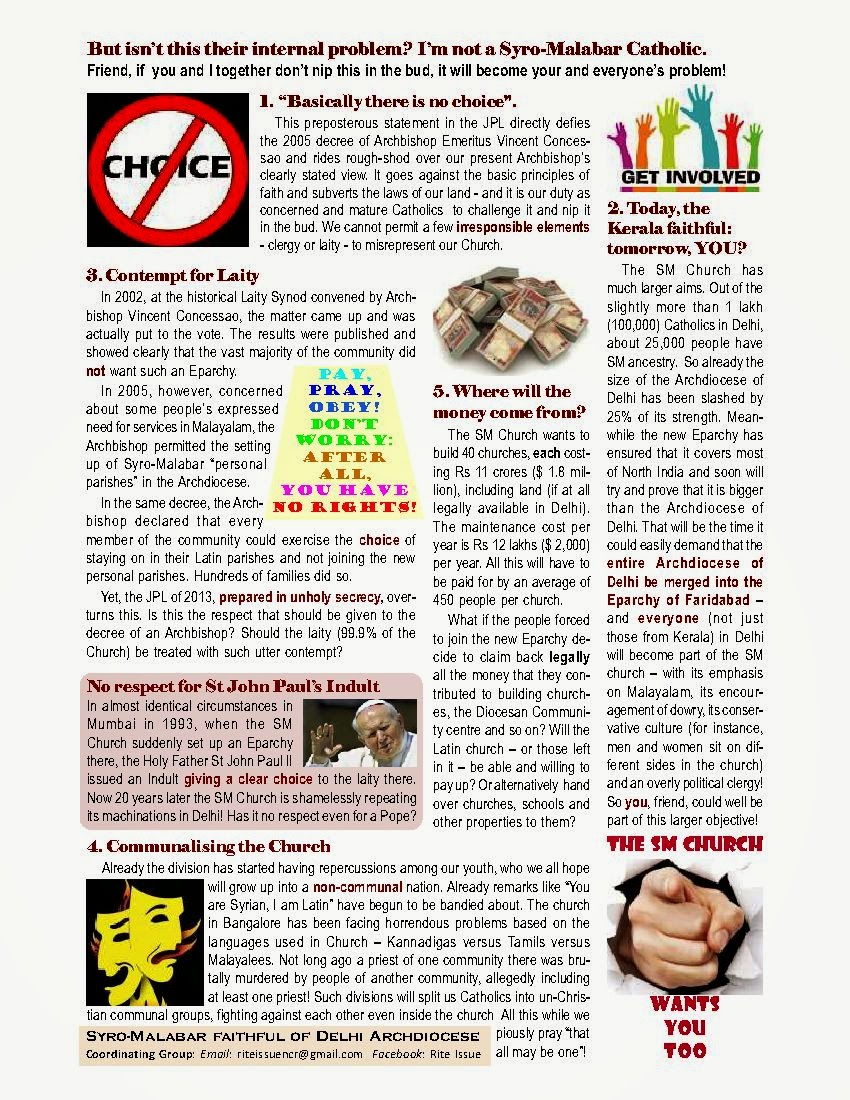 Posted by Soul and Vision at 8:51 PM No comments:

Email ThisBlogThis!Share to TwitterShare to FacebookShare to Pinterest
Pope warns clergy on 'celibate life lived as sterility'
Bitterness and gossip can be the consequence, he says.
Posted on July 29, 2014, 11:15 AM 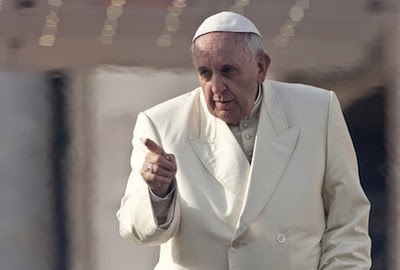 Vatican City:
One of the dangers of a "sterile" form of celibacy is bitterness and gossip, Pope Francis told a group of priests and bishops in Caserta.

"A man who is alone ends up bitter, not fruitful, and he gossips about others," the pope said July 26 during a meeting with 123 priests working in the Diocese of Caserta and 19 bishops from Italy's Campania region.

When a priest disagrees with his bishop or when bishops disagree with each other, they must air their differences -- even loudly -- but never talk behind each other's backs, Pope Francis told the group of bishops and priests. A transcript of the pope's remarks was released by the Vatican July 27.

"Say it to his face," the pope recommended. "You're a man, so if you have something against your bishop, go and tell him. There may be consequences, but pick up your cross, be a man!"

Not for the first time, the pope admitted that he, too, has been tempted to gossip. "I've wondered if this isn't the consequence of a celibate life lived as sterility, not fruitfulness."

A priest in Rome, he said, once told him that he was worried that so many priests and bishops are bitter and angry with each other.

"When we find a priest who lives with such anger and tension, we think: This man drinks vinegar for breakfast. Then, for lunch, pickled vegetables. And, in the evening, a nice glass of lemon juice," the pope said.

Pope Francis told the priests it is normal and even "healthy" to get angry, but wallowing in that, not getting it off his chest, not airing differences directly, but talking behind someone's back cause more damage.

The key to a fruitful life, the pope said, lies in "double fidelity and double transcendence: being faithful to God is seeking him, opening oneself to him in prayer, remembering that he is the faithful one," and "opening oneself to others" with empathy, respect and patience.

The pope told the priests that "creativity" is "a divine word," because God told Adam to care for the earth, make it bear fruit, "be creative."

Openness to the Spirit must be accompanied by openness to other people and to their real problems, the pope said. The only way to learn about the needs of others is to listen to them, patiently and resisting the temptation to give easy answers.

"We cannot be a church closed in on itself, navel-gazing, a church that is self-referential, that stares at itself and is incapable of transcendence," he said. "Going out is not an adventure, but a journey, it is the journey to which God has called us since the moment he told Abraham, 'Leave your homeland.'"
Courtesy: UCANINDIA
Posted by Soul and Vision at 7:42 AM No comments: 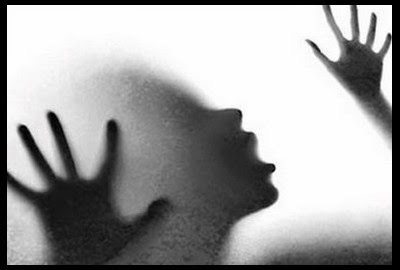 Source: Radio Vatican,  Report :William Nellikkal
Posted by Soul and Vision at 9:16 AM No comments:

KOCHI: A week after the Catholic publication ‘Sunday Shalom’ published an editorial praising Prime Minister Narendra Modi, ‘Sathyadeepam’, another prominent Catholic publication, has come up with an article severely criticising the controversial editorial.
It is stated in the article that paying tribute to someone by sacrificing one’s own soul was dangerous. The article that appeared in the column ‘Varikalkidayil’ was written by Fr Kuriakose Mundadan, former editor of ‘Sathyadeepam Malayalam’. The editorial by Sunday Shalom editor Benny Punnathara, terming Modi as a ‘Servant of Christ’, had created an uproar among the Catholic denominations.
The Sunday Shalom editorial described  Modi’s  victory in the Lok Sabha election as God’s decision.
In the  editorial, Benny Punnathara said  that the defeat of the Congress was essential for the Indian democracy as the same party repeatedly coming to power facilitated  corruption. “God can act through anyone. Even those who we perceive as our enemies can bless us,” the article said.
The article published in Sathyadeepam severely criticises the Sunday Shalom editorial.
“The intention behind making Modi a ‘Servant of Christ’ is not known. Those who write such articles are doing nothing but confusing the readers. They would have certain objectives to achieve. Comparing Narendra Modi to Persian king Cyrus, who is referred as a ‘Servant of God’ in the Book of Prophet Isaiah, is utter foolishness,” Fr Mundadan says in his article.
It is stated in the Sathyadeepam article that Modi could not wash away the stains of the Godhra riots, and that he had even challenged the democratic system by removing the Governors appointed by the UPA Government only because of political reasons.
“The stand taken by the Modi Government on the Israel-Palestine conflict is also under a shadow,” it said. Meanwhile, Fr Mundadan, who penned the article said it should not be taken as a tug-of-war between two Catholic publications.
“I pointed out the impropriety of a Catholic publication by terming Narendra Modi  as a Servant of Christ. Using Biblical verses to establish a wrong stand is not fair. Quoting Biblical verses to establish stands is a practice adopted by sects which have deviated from the mainstream Catholic faith and teachings,” Fr Mundadan said.

Source: NEWINDIANEXPRESS.COM
Posted by Soul and Vision at 8:51 AM No comments:

Get this Recent Comments Widget

All issues of Sathyajvala are available for dowload.